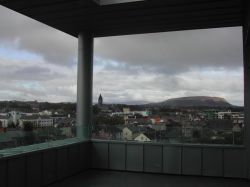 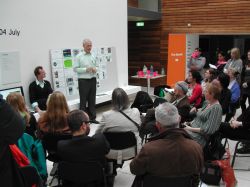 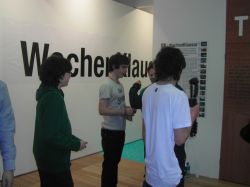 
With almost 18 000 residents Sligo is the biggest city in Irelands northwest situated about 8 km from the ocean. It has a train station, a small airport and a cross-urban bus station. The city is cut through by a river which opens into a great seascape in the southeast. The environmental crises hit Sligo for six: the unemployment rate is soaring since July 2009, a lot of shops had to close, many condominium and office buildings as well as whole housing complexes are not in use anymore and empty. Eye-catching are also the plenty parking lots all over the city. There is no real center with a pedestrian zone and places to relax are rare. The sidewalks are especially narrow, the traffic heavy. The heart of the city is dominated by a big supermarket chain and an overdimensional car park.

Together with 21 artist collectives from all over the world WochenKlausur has been invited to take part at the exhibition DORM. The group decided to establish a city development project, the exhibition space turned into an office and the group invited experts from various fields such as architecture, sociology, design or community work who live and work in Sligo to participate.

The first meeting already brought up the issue of the cityīs badly managed public transportation system. Its not only that the buses are driving through the city without any traceable concept and long riding times. The main problem is that there are no buses running on Sundays and holidays which means everyone without a car has to stay at home then. The unsatisfying local recreation situation was another issue. Although there is this wonderful seascape in the southeast of the city, there are almost no possibilites to rest like tables and benches for a picnic. There are nice playgrounds for kids though even there parents wonīt find any possibility to take a seat.

All results have been discussed and prepared for a final presentation. In this process, WochenKlausur found out that some design students from the local Institute of Technology just had a semester class exploring their visions for Sligo. The suggestions from the experts could easily be combined with the ideas of the students and all results have finally been presented to the public, representants of the city government, Sligos head city planner, the director of parks and recreation, the public art coordinator and the media.

With this project it was possible to target and develop strategies to improve some smaller but nevertheless urgent problems in a city within a short period of time. The reuslts where send to the responsible city executives and delegates electronically, a printed version remained for the time of the exhibition in the temporary office at The Model.