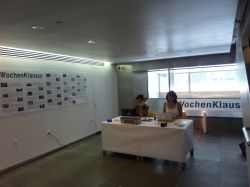 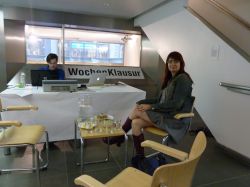 Invited to participate at the ōOur Hausö exhibition WochenKlausur decided to initiate and organize a series of presentations from organizations, associations, interest groups and activists dealing with issues of housing and urban built environment in New York City.


When asked by curator Amanda McDonald Crowley to present their work at the Austrian Cultural Forum's tenth anniversary exhibition ōOur Hausö, WochenKlausur decided not only to present a documentation poster exploring their work of the past 19 years, but to look at contemporary positions and practices on the topic of ōspaceö in New York. By handing over their exhibition space to local organizations focusing on this issue, it was possible to present a variety of agendas such as housing, public space and urban built environment on a central city spot.

Firstly, from May 20 to May 27, 2012, WochenKlausur set up an office in the ACFNY Gallery's Upper Mezzanine, where several meetings with New York-based associations, interest groups, and activists took place. Each of the organizations was invited to use the space for one or two weeks for their purposes. The aim was to support them with the infrastructure and facilities of the institution. Some looked for exhibition space, some for a room to hold a workshop, others launched a film festival or held a fundraising event. At the end, nine organisations have taken the opportunity and used the ACFNY as a platform to explore their work. Until 26th of August 2012 - when the exhibition shut down - a vivid summer program has taken place.