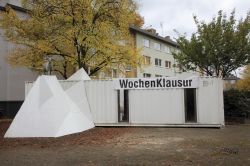 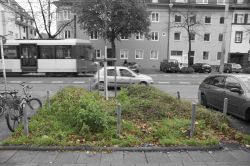 On invitation of the Department of Art and Culture in Cologne, WochenKlausur worked together with local citizens on suggestions for improvements within a specific planning zone on the right river bank of the Rhine.


To get the attention of local citizens for the planned project, WochenKlausur clad the neighbourhoods landmark, the so-called “Düxer Bock” in a mountain made of wooden panels and built their workstation right next to it in a container. In this workstation the group led a total of 223 talks about the use of public space, traffic flow, green areas and the cultural offer in the area. Besides the group sought exchange with experts, stakeholders as well as members of the city administration and politics. The group also offered the possibility for written comments by adding a mailbox right in front of the container.

The talks were not meant to be systematic or scientific. The idea was to find out, what simple and reasonable measures would improve the quality of life in the neighbourhood. Realizable ideas should be filtered, put into a catalogue of actions and presented to the city administration and politics for implementation.

One example of such a simple, reasonable and easy to implement measure added to the catalogue was the re-movement of the jungle of signs, bollards and bicycle skeletons. This would immediately lead to more space on the sidewalks and allow access to the wildly growing green areas. Easy to improve would also be the situation for the elderly and walking impaired through the integration of park benches on the main traffic roads cutting through the addressed planning zone. Or handing over the maintenance of the wildly growing green areas to locals. Taking over the work in these public gardens brings care for the green and joy for the keepers at the same time. A more complex idea, still added to the catalogue of action was the re-design of the Lorenzplatz where the local landmark, the “Düxer Bock” is situated. Even though being visually a city square it is not listed as one in the street directory. The square needs some structural as well as horticultural adaptations.

The group finally initiated the “Deutz-Dialogue” (www.deutz-dialog.de) - a monthly gathering of small groups who further plan and thereby push the realization of the various improvements. Some focus on the green areas, others list the locations of the unused bicycle corpses and another group creates a leisure activity programme for teenagers.

Even though the focus neighbourhood “Alt-Deutz” provides a high standard of living conditions it is very disconnected from other districts through structural conditions and traffic connections. This certain condition can become a chance for developing an identity as a town in town, an area with its own special profile within the city of Cologne.