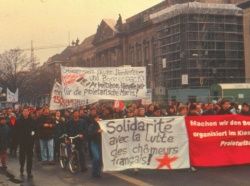 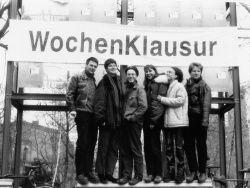 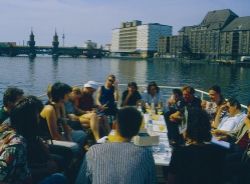 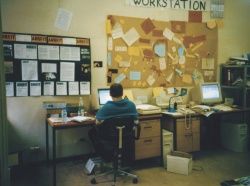 In view of difficulties on the labor market, WochenKlausur in 1998 set up a workstation for the development and realization of ideas in the struggle against unemployment. With the help of local organizations an office in Kreuzberg was installed where unemployed can discuss their ideas with relevant experts.


In 1998 Kreuzberg was the Berlin district with the highest percentage of unemployed people and welfare recipients. Despite numerous initiatives, the media had labeled it a “social hotspot” deteriorating into a slum. At the time, politicians hoped that the widespread employment crisis would come to an end, bringing about a relaxation of the situation. In any case, local officials were making an effort to improve the training and counseling services available.

Public agencies involved with the labor market generally understand employment first and foremost as a means of subsistence. However, work can also be understood as the occupation of human beings in a way that corresponds to their abilities, interests and ideas. Then it is no longer the market that is the most important criterion in the search for a paying job, but the needs of the individual seeking employment.

WochenKlausur conceived a workstation, consisting of an “Info Tank” that would help unemployed people develop their own ideas of what they could do for a job, and a “Think Tank” that would aid them in realizing their individual projects.

Funding was, of course, not readily available. Thus it was necessary to make as many contacts as possible in order to attract attention to the project. Announcements were put in the newspapers, the employment office and other counseling institutions were contacted, public presentations on the issue were organized, and numerous experts from various fields were invited for talks. A great deal of cooperation was stimulated by these efforts: the district government made available an office in a good location, a “job creation program” contributed computers, and Frauke Hehl from the unemployment initiative Springboard took over the permanent administration of the workstation initiative. The final decisions were made at a summit meeting held on a boat excursion on the river Spree.

Then it was possible for the workstation to go into operation. The Info Tank supplied information about existing opportunities in Turkish and German and offered individuals support in developing and formulating their own ideas and plans. In the summer of 1999, the Think Tank launched its first projects, drawing up exact plans for their realization, testing their feasibility and contacting possible cooperation partners.