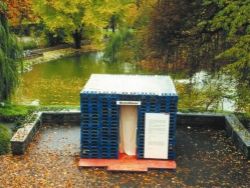 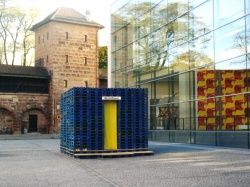 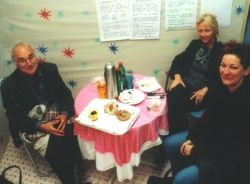 In the cities of Nuremberg, Fürth and Erlangen people and groups that usually avoid one another for ideological or other reasons were invited to sit down and talk. A total of 64 opponent parties agreed to do a talk with professional mediation.


Within the framework of the long-term project log.in, WochenKlausur was invited to make a contribution to “Networking Greater Nuremberg”. The group set itself the goal of bringing together people and organizations whose views and ideas could not have been more different. Often it is plain and simply a lack of knowledge of an opponent that gives rise to emotionally charged animosities.

Initially research was conducted into disputes in Greater Nuremberg, particularly those in which the flames had been fanned by media coverage. In the course of the project, new areas of conflict were continually being discovered, in which it was quite clear that a face-to-face discussion would never take place between the parties in conflict.

After many attempts and repeated conversations with proponents of the conflicting parties, a readiness to participate in a meeting could usually be established. An effective strategy was to imply to each group that their opponents were willing to talk. There were also refusals. Many disputing parties categorically rejected any and every rapprochement. For example, a weapon manufacturer, who had been named an honorary citizen of Nuremberg under heavy protest, refused to talk to a critic, and conversely, the critic was also not very interested in participating in a meeting of any duration.

In the end, strategically positioned pavilions built using Euro-pallets and widespread media coverage of the project helped bring together 64 conflicting parties from a variety of fields over a period of two weeks. Although information regarding the participants was made public, the meetings themselves always took place in private. They were limited to two hours and assisted by professional mediators.

Many of the participants met each other personally for the first time. A few examples: the owner of a Turkish travel agency in Fürth talked with a speaker of the Christian Social Union whose radical statements on immigration policy had caused a stir. In Erlangen, fans of the regional soccer teams from Fürth and Nuremberg, who only knew each other from brawls after the games, encountered each other. Another discussion was held between members of an ultrarightist university fraternity and young punks. In Nuremberg, the representatives of a citizen’s initiative met with the construction tycoon against whose plans its protests were aimed.

The thoroughly positive assessment of the talks on the part of the participants – only two of the meetings ended prematurely – caused the Nuremberg Society for Mediation to continue organizing similar discussions during the next year. The key strategies of the project, such as isolating the conflicting parties from their accustomed surroundings and decreasing media pressure, were maintained. It was planned that the “Days of Enmity” would be held on a yearly basis, but in the end the event was only repeated once.
Geraldine Blazejovsky, Dagmar Buhr, Christoph Eischer, Pascale Jeannée, Wolfgang Zinggl