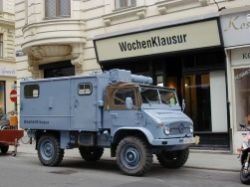 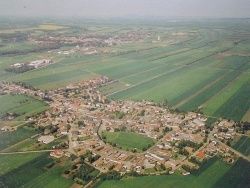 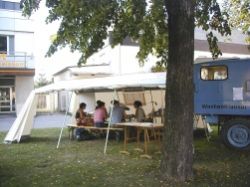 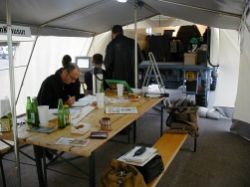 With a mobile laboratory and a team of scientists, WochenKlausur drove through Austria, visiting seven towns for four days each. From an external perspective and with the help of experts in the field of urban planning, ecology, sociology, tourism and architecture ideas for improving the communities were elaborated.


In the summer of 2001, WochenKlausur made an offer to a number of communities in Lower Austria and Styria: in a project intended to serve as a model for cooperation between art and science, proposals would be drawn up for improving the quality of life in each of the towns. Seven communities agreed to participate.

In the preparatory phase, experts were recruited from the fields of city planning, ecology, sociology, tourism and architecture. A Unimog all-terrain vehicle was rented especially for the project. It was customized into a mobile office with laptops, printers, telephone, fax, internet, cameras, recording devices and the like.

During the project phase the team drove from town to town, setting up camp for four days at each stop. Positive and negative aspects of the town were noted, proposals for improvement were drawn up, and on the last evening these ideas were presented to the mayor, the town council and all interested residents. The self-imposed time limit necessitated concentrated and precise planning of the team’s cooperation. Each day began with a short meeting, which was followed by research on location and the listing of positive and negative observations. In the afternoon these impressions were discussed and ideas for improvement were developed, and in the evening all of the results were documented. The feedback from the municipalities to these proposals for community development were very encouraging, and many of the proposals were subsequently realized.


Examples of proposals that were presented in detail:
- Hohenau an der March: find a new use for the former sugar factory; build a bus-stop shelter; create an optical “gate effect” at the points where traffic enters town; establish safe pedestrian crossings on the main street in the vicinity of the town hall and the school; provide more shade and a water source in the vicinity of the playground sandbox
- Gleisdorf: restore the banks of the creek; weed out the jungle of informational and advertising signs
- Greinbach: improve the community’s appearance by renovating its characteristic old buildings; enter into a waste-water treatment plant maintenance cooperative with neighboring communities; clearly mark the intersections of hiking trails
- Friedberg: widen the sidewalks and sink the curb at pedestrian crossings; make an effort to attract businesses to the vacant storefronts on the central square
- St. Magdalena: plant deciduous trees to preserve the ecologically intact landscape
- Laa an der Thaya: provide a bike path that is isolated from automobile traffic in the area around the traffic circle
- Retz: make use of wind energy; decrease the language barrier to the neighboring Czech Republic through pupil exchanges