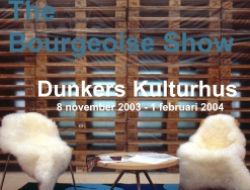 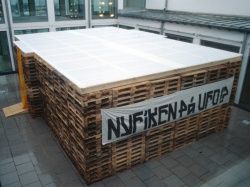 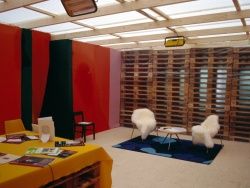 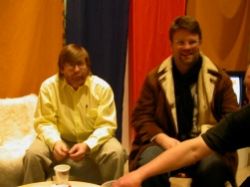 Dunkers Kulturhus usually hosts exhibitions of internationally recognized art. WochenKlausur created a platform where various interest groups and associations of the region can also present themselves to the general public.


The Danish curator Kirse Junge-Stevnsborg invited WochenKlausur to participate in the exhibition The Bourgeois Show – Social Structures in Urban Space with a modest intervention. This show focused on the dominance of the bourgeoisie in Helsingborg’s cultural life, which leaves few opportunities for the wide diversity of cultural currents outside of the bourgeois norm to interact with the public.

In order to increase awareness of this issue and give disregarded cultures in the region a chance to attract public attention, WochenKlausur erected a house using Euro-pallets in front of the Kulturhus as a presentation platform for subcultures. A wide variety of groups ranging from sport clubs to animal-rights activists were then invited to use the house: each group had a week’s time to present itself to the public, discuss its agenda with visitors and attract new members. The presentation weeks each began with a press evening, at which the individual organizations and groups discussed their intentions with guests invited from politics, culture and the media.

In the course of the events, new cooperations were also arranged between some of the groups and Dunkers Kulturhus. Thus the Kulturhus also benefited from the series and found access to new segments of the public.
Three examples:

•Curios about UFOs? The organization UFO Sweden is working on the world’s largest archive of observation reports involving unexplained, extraordinary phenomena. More than 500 people per year report such experiences. The association UFO Sweden processes the reports critically while refraining from any interpretation. (www.ufo.se)

•How come the girls put all their energy into soccer? The successful Helsingborg women’s soccer team Stattena IF presented its athletic achievements and its ambitious social projects involving work with girls and women. (www.stattenaif.se)