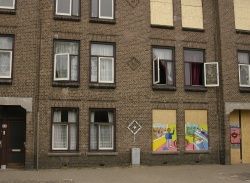 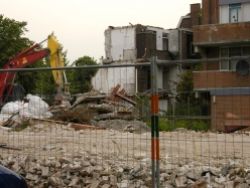 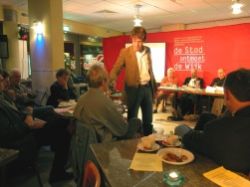 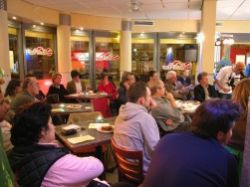 A discussion platform was established in The Hague’s district of Transvaal, which has been profoundly affected by the Dutch urban renewal program. This platform can be used to invite experts and together discuss or adjust conflicts in the communities.


The destruction wrought by the Second World War combined with widespread migration to urban areas to produce a construction boom in the Dutch cities. Between 1945 and 1970, two million apartments were built quickly and cheaply. As one would expect, their condition today does not even meet minimum living standards. Since urban growth has shown no signs of abating, the Dutch government has launched a radical revitalization program. Entire neighborhoods have been razed to facilitate the construction of new housing and to promote the social restructuring of disadvantaged areas.

Taking advantage of this urban renewal program, the art organization OpTrek used abandoned apartments in The Hague’s Transvaal district for art projects, and they invited WochenKlausur to participate. Although it is centrally located, Transvaal is considered a problem district, with an unemployment rate of 70%, a population structure made up of 85% immigrants and inadequate living standards and infrastructure.

WochenKlausur decided to establish City Talks. After numerous meetings with organizations, district residents and elected officials, it became clear that, in addition to the problems resulting from the exodus of higher-income residents and from urban renewal projects, it was primarily the problems divergent communities had in living together that gave rise to conflicts. Thus residents should be given an opportunity to discuss their concerns with experts.

Despite the great number of unused spaces in the district, the search for a suitable location for these events proved to be the most difficult part of the project. Finally it was possible to find a facility in one of the newly built housing developments that agreed to host the meetings.

It was necessary to establish topics, participants and dates for the first discussions, and it was also important to find an existing organization that would be willing to continue the project. In the end the Instituut voor Verborgen Kennis, in cooperation with the Transvaal Stichting Buurtdebatte and the Mobiel projectbureau OpTrek, agreed to manage the program’s long-term coordination and organization. It is funded by Fonds 1818, Oranje Fonds, Gemeente Den Haag and Forum voor Democratische Ontwikkeling.

Two examples of the panel discussions:
8 Nov. 2005: Public Space: Who is allowed to use it, and does the new city planning improve its use? With: Jeroen Geurst (Masterplan Transvaal); Egbert Schuttert (city planner, responsible for public space in Transvaal); Klaas Hilverda (city planner, responsible for district planning). Moderation: Lucas Verweij (Director of the Rotterdam Architecture Academy)

15 Nov. 2005: Rights for Illegal Aliens? Numerous immigrants without residency permits live in very close quarters and are exploited by their landlords. Do they have any rights, even though they have no legal residency status? With: Richard Staring (scientist, Erasmus University Rotterdam); Stef Blok (parliamentary representative), Stichting Prime (organization for people without legal residency). Moderation: Peter Horst (former editor-in-chief of the Haagsche Courant)