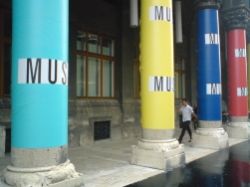 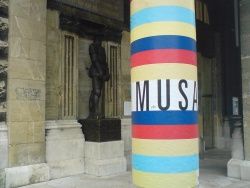 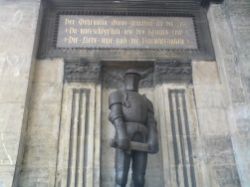 In connection with the legendary "Wehrmann in iron" the Vienna Cultural office asked the group WochenKlausur for proposals how to deal with commemoration and the past.


Next to the Viennese city hall, at the entrance of the new Artothek (MUSA – Museum auf Abruf) rooms you find the so-called "Wehrmann". The three meter high, wooden knight figur conduced to propaganda purposes during the 1st World War. Citizens were called to support war welfare and in return they were allowed to drive an iron nail into the statue. That´s how the wooden knight became the "Wehrmann in Iron".

Brasses, memorials or street names support the collective memory and indicate past events and personalities. In fact, a lot of signs and names are not known anymore or are read in a wrong context. A prerequisit for a conscious historic commemoration is therefore a comprehensive knowledge that proceeds beyond the single event or character of the past.

Furthermore a lot of symbols of an unwanted past get simply eliminated. By the demolishing of monuments or renaming of streets history can be influenced according to the interests of the preveiling culture. Composition, preservation as well as erection of signs within a society follows the wish to conserve only positiv mementos and to romanticize the past. After the fall of the iron curtain in 1989 almost all examples of the Socialist Realism were torn off as glorification of the Communism in the countries of the former Eastern Bloc to give only one example.

On invitation of the MUSA and the Vienna Culture Office and having the "Wehrmann" in front of the doors of the museum in mind WochenKlausur proposed active examination and commemoration of the past. The group developed three lectures which can take place in the rooms of the MUSA and can be booked by interested schools and other groups. Easy to get across, according to the latest information level and prepared with a lot of picture and video material the lectures open a subsequent discussion.

Why art – when we talk about memory: Artists especially those who do fine arts are suitable to turn intentions and emotions into forms. On the other hand artists always tried to use radical forms and concepts to accent certain aspects of memory as something special, extra-ordinary and apart from the normal course of life.

The "Wehrmann" in the 1st World War: During the First World War a lot of "Wehrmänner in iron" could be found and they all had the same purpose: the collection of money for the war by addressing the national and patriotic conscience.