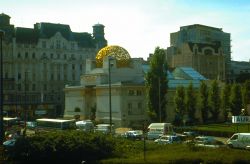 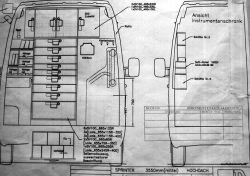 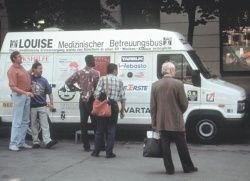 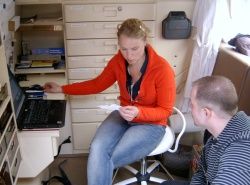 In Vienna it was possible to make medical care available to homeless people. Now a mobile clinic provides care to approximately 700 patients per month – free of charge and without any questions about insurance.

The first project took place in 1993. Upon receiving an invitation from the Vienna Secession, the group decided instead of putting on an exhibition to carry out a project to improve the situation of homeless people. At the time of the project, Karlsplatz, the plaza in front of the exhibition building, was known throughout the city as a meeting place for homeless people.

Even in the 1960s, people without a fixed domicile were criminalized as vagabonds. Later the so-called vagabond was no longer considered a law-enforcement problem. The authorities simply ignored homeless people. It was not until 1980 that the political system recognized the prevention and reduction of homelessness as a matter to be acted upon.

WochenKlausur soon learned that these people had no access to medical care. In theory, homeless people are insured under Austria’s socialized medical system. In practice, the bureaucratic effort entailed in obtaining health services is insurmountable. Furthermore, treatment is often refused in doctor’s offices with the argument “go wash yourself first.” Thus the group endeavored to set up a mobile clinic for providing basic medical treatment. Initially it was necessary to obtain a van. The purchase was made possible by numerous small sponsors, who according to the size of their donation were able to affix their company logos in varying sizes on the vehicle. WochenKlausur customized the van into a mobile clinic. Over the course of the project the group needed to raise more than 70,000 euros and obtain numerous donations in kind.

That was hard enough. What proved to be even more difficult, however, was paying the salaries of the physicians who were to work in the van. The City of Vienna was the only possible source of long-term funding, but at first the city councilor responsible did not agree to the project. Thus WochenKlausur resorted to a trick, asking a correspondent for the German news magazine Der Spiegel to conduct an interview with the councilor and pretend that he was interested in reporting on the project. Since the politician did not want to appear in the German press as the cause of a dedicated art project’s failure, she had no choice but to provide funding for the physicians who would staff the clinic – initially for one year.

That was in 1993. The article was never published. But since then the van has every day been visiting one of the places in Vienna that are frequented by homeless people, providing more than 700 treatments per month. Actually it is already the second van: in 1998, after five years in operation, the old one was replaced by a larger vehicle. In the meantime, the relief organization Caritas has taken over management of the entire project. The mobile medical clinic carrying the name “Luise” has become a permanent institution. It also treats foreigners who have no insurance and thus no other access to medical care.
Martina Chmelarz, Marion Holy, Christoph Kaltenbrunner, Friederike Klotz, Anne Schneider, Erich Steurer, Gudrun Wagner, Wolfgang Zinggl