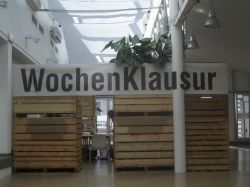 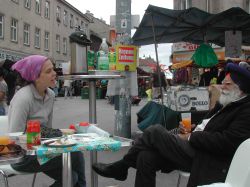 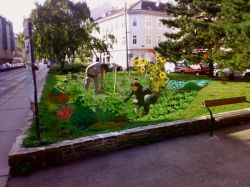 To show that nationality and ethnic background do not have to be the main characteristics that allow a group to form identity, WochenKlausur established three interest groups whose members differ in nationality but share interests, concerns or requirements. Three groups could be established, one referring to the topic of housing and migration, one discussing local politics and another one who does gardening in the public space.


Social affiliation and commonality are definable over various factors. For example are all people who live in the same district a group. Or all people who live in the same district but were not born in Austria. Or all women in the district. But besides characteristics like sex, origin, religion or age people can also form a group because they share the same interests, concerns or needs. In two ethnically differing groups with apparently nothing in common someone might find two chess players who discover even more similarities. Among catholic and islamic adherents someone might find people who share the same political opinion.

On invitation of the art space Brunnenpassage WochenKlausur located such hidden "communities of interest". Using the network of already existing migrant and culture associations as well as using the possibility to conduct personal conversations on the famous street market in the district WochenKlausur learned about specific needs and formed three pools that are independent from nationality, origin or religion carried on only by common interests. Since then one group hold political discussions, a second starts to design public green spaces in spring and a third one meets to debate the possibilities and limits of social housing in the city. One task for WochenKlausur was to assure an equilibrium regarding origin of the members within every group. The merged groups now meet regularly.

The following interest groups worked out detailed project plans and programs together with WochenKlausur:

Club 16 – Once a months Club 16 invite a competent guest to discuss a social or cultural political topic. This fulfills the again and again expressed wish for political articulation. WochenKlausur procured contact to possible relevant guests.

Station Garden – Everywhere in the world you can find people that come together to plant public green spaces. With the WochenKlausur impact a new association was founded whose members come from seven different countries. They now aim to design some of the cities smaller green areas of their own choice. WochenKlausur could secure the acceptance of the public authorities for this project and organized the first garden bed.

What do you live – People with different origin may have (or not) different experience, needs and habits regarding their accomodation facility preferences. The now adjusted group of experts discusses various living concepts and after a certain time they want to make the results public. WochenKlausur helped by the registration of the group as association and organized a room where they can meet.