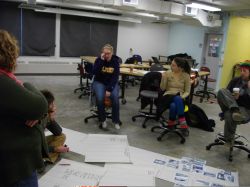 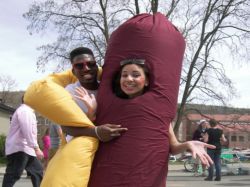 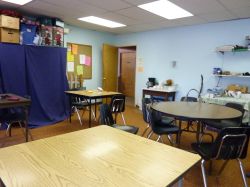 Together with art students from Alfred University where WochenKlausur was invited to teach a class on the topic art and social context in spring 2010, a meeting point for after-school activities could be established.


To teach an University art class to do a WochenKlausur project proved to be a challenging task as the time availability of the students was extremely limited but finally it was possible to realize a project on-site although the students could participate only to some extend. The research – as in every WochenKlausur project – was the first step to take. The students collected information about the living conditions in Allegany County, the poorest and economically most deprived County in New York State. The results highlighted the deficits: high rate of unemployment, a failing recycling system at University, an insufficient public transportation system, the empty shops in the Main Streets, the lacking networking of the relief organizations, a polluted swimming pond and the practically not existing afterschool programm for teenagers.

The final decision about what issue should be addressed with a project was up to the art students who took the class with WochenKlausur. They had to check if some organizations haven´t already started to take care about one of the problems they learned about and they had to keep in mind the limited time-frame. In the end they decided to use the class-time to realize a project for the teenagers of Allegany County who mainly (over 50 percent) are at high risk of poverty or are already living below poverty line. They choose Wellsville as their place of intervention, the town with the highest population in the County. In several talks at the local high school they found out that expecially the younger teenagers, between 12 and 14 years, miss a spare time program and a meeting place for possible afterschool activities.

The director of the town´s Community Center where up till then only the older residents found distraction and program could be convinced to cede one of her rooms for the use of the young ones. To get the allowance for the necessary refurbishment of the room from the town council the students asked two professors from the Alfred University´s School of Art & Design to conduct the negotiations: Under the condition to assure supervision for the planned teen center, the City Council gave their consent.

The next exercise for the art students was to actively involve the future users into the project. Therefore the art students produced a short video clip that was shown at school television and via questions-and-answer cards the students collected over 60 ideas of the pupils for the planned room.
Besides it was necessary to organize money to ensure the continuous supervision for the room and the search for possible sponsors was another duty for the students. A local enterprise and a bank finally agreed to accept the costs for the first year.

At the same time the refurbishment was going on. The floor was renewed, walls have been demolished, furniture have been built and together with the interested teens the walls were painted. Also for the needed building materials it was necessary to collect money and contributions in kind: not easy in an area that is economically as deprived as this one. Every opportunity was used, even the well known Hot-Dog-Day in Alfred – a well visited yearly event. The art students built a Hot-Dog-Costume and for a donation visitors could wear the costume while a memory photo was taken. With the collected money a Hi-Fi System and a DVD player could be purchased.

Due to the bad financial situation of New York State there is almost no money which the schools can use to provide afterschool activities. The pupils wished to have a small program for their room and the art students decided to offer workshops by themselves and they could also convince their collegues to held some of the desired courses (graffiti-, comic drawing-, DJ-workshops etc.). Since May 2010 the room is open for the use of all the young residents of Wellsville.