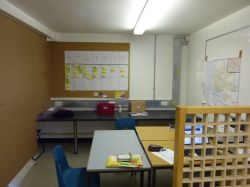 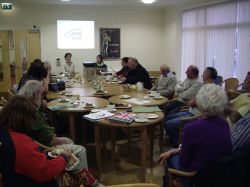 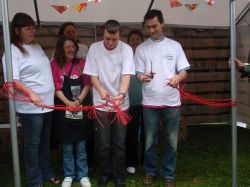 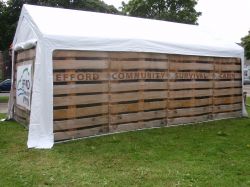 In Plymouth WochenKlausur supported interested residents in forming a committee to coordinate the already existing community programme and to raise public awareness for the need of a Community Center in Efford.


Although benefiting a lot from a major redevelopment in the area one wish of the community of Efford is still not fulfilled: the one for a Community Centre to host the versatile programme from and for the residents of Efford. A social meeting spot where people can join for Bingo and Pub Quiz nights, public sport viewings, BBQ's and so on.

Empty buildings in Efford are difficult to find and their owners are yet not convinced about the need for a community center as there are a few spaces available such as the school or the church to host public events. The argument of the community on the other hand is that there is no central and neutral room, designated to and fully owned and managed by the residents.

WochenKlausur felt that there was first of all a need to express the wish of the residents to the decision makers and authorities in Plymouth as well as to the house owners in the Efford area. Therefore WochenKlausur encouraged interested people to form a committee to proof that the residents in Efford are organised and ready to manage a community centre by their own. The newly formed group now promotes what is already happening in Efford, extends the activity programme according to the still unfulfilled wishes and by doing so expresses the need for a community centre under the noticeable name: Efford Community Vision www.effordcommunityvision.org. To support this committee in all its duties WochenKlausur found project partners to finance press and advertising activities and a skilled freelance coordinator who works on behalf of the committee.

To boost the activities of ECV and quickly raise awareness for the need of a central and community owned space in Efford WochenKlausur finally presented the idea to build a small but eye-catchy temporary cabin. On behalf of the Efford Community Vision they gave out a call for a design competition: survival cabin.wordpress.com. A mobile tent was finally produced and is now travelling around Efford to host community activities and to express the wish for a permanent community centre.

Meanwhile ECV aims to take over an empty office building in central Efford for a peppercorn rent. This space is owned and operated by Plymouth Community Homes who already declared to stop working from there within the next couple of months. Presenting to them the progress the community has made within 5 weeks brought a first success: They officially announced that they are willing to take the opportunity to turn the office into a community centre as a serious option when they decide how to proceed with the property. A delegate of Plymouth Community Homes followed the ECV invitation to become a member of the committee.