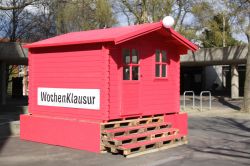 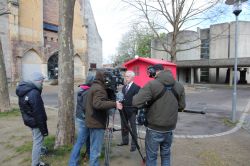 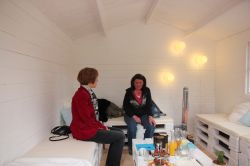 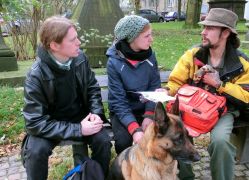 Behaviour in relations with addicts on public space is, as everywhere, a matter of concern in Kassel. For the “Lutherplatz” WochenKlausur developed a concept to reduce conflict which the city and the local church is realizing.


The Lutherplatz in Kassel is a square like many others in Germany with a church, a community center, a park and a commonly used lane, which leads directly into the city center. Local residents are occupying the green areas, the protestant church offers a cultural programme and in early 2013 the church youth group moves to the square. An art initiative is located at the northern corner and on weekends the Lutherplatz becomes a meeting spot for teenagers consuming alcohol before heading on to the clubs. But for years, the location has also been used by Kassel’s drug and alcohol scene. The addicts value that the square is relatively secure and close by to all the important medical and social facilities. Though this community has a bad reputation especially due to the local press who prefers to fuel unjustified fears before discussing the question to whom public space belongs and what purposes it needs to fulfil for its community.
In spring 2012 WochenKlausur was invited to Kassel by the protestant church to amend the situation on Lutherplatz.

In a first project step the group conducted more than ninety talks with representatives of all conflict parties: the police, the office of public order, the church, the city council and administration, the relevant medical and social institutions and of course with the addicts. By doing so WochenKlausur ascertained a general idea of the site and at the same time promoted understanding for the precarious life of marginalized groups without neglecting existing fears.

In accordance to the results of all talks the group developed a concept to improve the situation on the square for all its users. This concept proposes two social workers, who act as multiply aligned mediators between the various conflicting sides. Furthermore they establish mandatory rules on the square and guarantee qualified assistance for the addicted. Being familiar and in contact with all users of the square the social workers improve the communication system.

The second step was to successfully install these social workers. This was only possible with the support of the city and the church, the two main players on the square. To gain their interest and support, WochenKlausur built a bright-pink garden house on Lutherplatz only for this purpose. Then the group invited representatives of the church, the drug-scene, the social facilities, the resident cultural initiative, the police and the city government to have non-public talks in this eye-catchy garden house which attracted the attention of many.
The talks focused on infrastructural issues: Which institution should be responsible for the social workers, how many hours of attendance are necessary, would a cooperation with Café Nautilus (a recreation room for addicts) and the planned consumption room be fruitful etc. Funding was the other main topic.