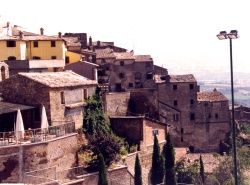 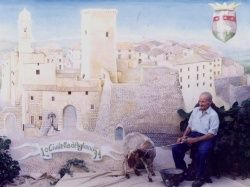 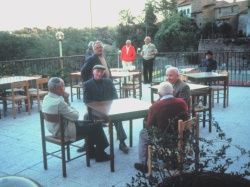 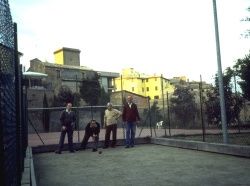 In the Italian town of Civitella d’Agliano a social center with a bocce court was opened for the community’s senior citizens, who represent 25 percent of all the residents.


Civitella d’Agliano is a picturesque small town 90 km north of Rome. It hosts the annual Progetto Civitella, a summer symposium for artists from many different countries. In 1994 WochenKlausur was nominated for the Progetto by its Austrian curator Heidi Grundmann. The group decided to do something that would improve the living standards of the town’s older residents, who represent around a fourth of the population. The percentage of older people is so high because younger residents generally move to Viterbo or Rome in search of work, only returning to their hometown when they retire.

WochenKlausur wanted to realize plans for a social center that the community had been promising its seniors for many years. For this purpose, the group arranged for an article to be published in the local newspaper informing all residents of their plan. Simultaneously, a refrigerator bar and a dishwasher were obtained and installed without further discussion in two empty rooms in the town hall’s ground floor. This demonstrative occupation of the space served as a challenge to the town council to start finding solutions.

Funding for the equipment was raised through a photo action. WochenKlausur painted a large veduta of the town’s historic center before which residents of Civitella could have their picture taken: families, clubs, a farmer with his sheep, the priest with the altar boys, nephews, lovers and sports fans. The action was a big success. By purchasing the photos, the residents were able to do their part in the effort to open the senior center.

Right next to the construction site for the senior center was an abandoned bocce court, whose playing surface and lighting system were unusable. From the very beginning, WochenKlausur had planned to take on the task of renovating the court and making it a part of the senior center. Bocce was a subject of great interest to the residents: whenever the topic came up, the older people had quite a bit to say about it. They had created and maintained the court themselves until it had been made unusable by an expensive renovation project begun in 1981.

Again WochenKlausur had a long article published in the town newspaper Comunità. It received widespread attention, and three days after its publication the mayor agreed to repair the court. The senior residents pledged their readiness to take care of maintenance, as they always had. Before the group’s departure bocce was again being played on the court.
Martina Chmelarz, Katharina Lenz, Rosa Gasteiger, Friederike Klotz, Stefania Pitscheider, Erich Steurer, Wolfgang Zinggl