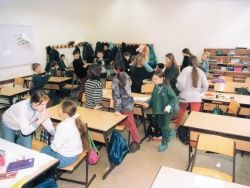 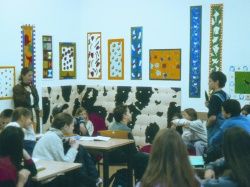 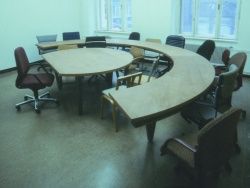 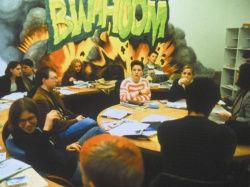 Together with pupils, the group turned its attention to the spatial problems posed by their two classrooms. During the 1996 project new furniture was designed and built, the walls were decorated and the lighting was improved. Not only the atmosphere in the class could be improved but first of all the motivation of the pupils.


Pupils do not have a lobby, and they have almost no say in designing the spaces in which they spend many years of their lives. They sit on chairs that conform to government standards but are not ergonomic, and at desks that were built for frontal instruction. In close cooperation with the pupils of a Viennese secondary school, WochenKlausur fully redesigned the classrooms of a sixth-grade class (ages 11-12) and an eleventh-grade class (ages 16-17).

Providing tailor-made solutions was one of the project’s primary aims. While the professional architects usually commissioned by schools work according to a booklet of standardized specifications, the group consciously sought to ignore these guidelines. Instead the pupils were asked to describe their needs and make suggestions.

With the twelve-year-olds in the sixth-grade class, it took quite a bit of patience to sort out realistic suggestions from fantastic ideas such as classroom pets, retractable TV sets and jungle plants. In the end WochenKlausur was able to establish that the seating arrangement was very uncomfortable and posed a hindrance to group work. Thus the group built rounded desks arranged in four concentric rows of increasing radius. The radial seating arrangement promoted communication and improved the pupils’ view of the blackboard. Additionally, the coat racks were moved out into the hall, and the space thus freed up was converted into a cushioned sitting corner for use during breaks. The lighting system was then improved in accordance with the new furnishings.

Paying for the alterations was the biggest challenge. Since the public school system does not react to the design wishes of individual school classes – especially when these wishes do not conform to official standards – the group was left up to its own devices and the support of private sponsors.

The main problem for the eleventh graders was the size of the classroom. Every day, 18 seventeen-year-old pupils sat together in a cramped 21-m2 room. It was possible to make optimal use of the space using an arrangement of two concentric desks. The blackboard was also too large, and it was replaced by a smaller one measuring a single square meter. The class was quick to agree to all of the improvements (new lighting, better lockers, a new coat rack etc.). Deciding on a wall decoration was the only difficulty. While some dreamed of Scottish plaids, others wanted plain white with lace curtains. WochenKlausur built models of the classroom, and in a full-day workshop it was possible to reach agreement. All of the pupils’ proposals were presented for discussion, and then the ideas were eliminated one after the other until a single variant remained that everyone could agree upon.
Carmen Brucic, Simone Höller, Dominik Hruza, Pascale Jeannée, Felix Muhrhofer, Susanna Niedermayr, Stefania Pitscheider, Erich Steurer, Wolfgang Zinggl