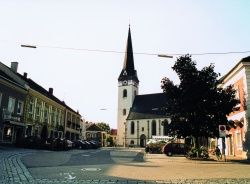 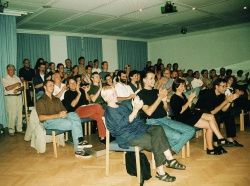 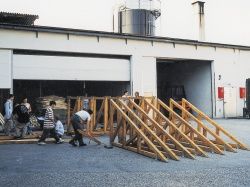 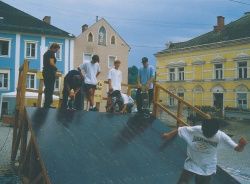 In Ottensheim the public was given a chance to participate in the municipality’s decision-making process. WochenKlausur founded three interest groups devoted to youth issues, seniors’ interests and the revitalization of the town’s historic center.


In the summer of 1997 WochenKlausur was invited by the Upper Austrian festival der regionen to conduct an intervention involving community development. Community development is a broad topic involving housing and urban development, transportation, social infrastructure, education, health, culture and leisure activities. WochenKlausur set itself the goal of functioning as a catalyst in three selected areas and awakening the residents’ interest in planning and decision-making processes.

Ottensheim has 4,000 residents and is situated eight kilometers to the north of Linz, the provincial capital of Upper Austria and home to around 200,000 people. It is an attractive place for those who would like to unite the advantages of the city with the peace and quiet of small-town life.

In order to familiarize itself with the residents’ concerns and wishes for their community’s development, WochenKlausur initially sent out questionnaires to all households. Simultaneously, the group talked to people in the inns and on the main square. Input from the town council and the mayor was also of great importance. All of these conversations were recorded to support later demands that specific measures be taken. Subsequently, WochenKlausur developed a framework for public participation and founded three interest groups: one for revitalizing the town’s historic center, one for promoting the social integration of older residents, and a third representing the interests of youths between ten and fourteen.

The Youth Interest Group (Youth IG) built a skater ramp under WochenKlausur’s supervision. The materials required were provided by local businesses. After the ramp’s completion, the group also devoted itself to setting up a youth center for year-round activities. The Seniors IG, in cooperation with pupils from the local polytechnic, interviewed residents of the older generation, collecting accounts of the town’s history. The Marketplace IG devoted itself to making the town’s center more attractive, particularly through the establishment of a weekly market.

A total of fifteen IG meetings were organized and moderated by WochenKlausur, whereby the group was able to contribute ideas, information and professional experience from the fields of architecture, spatial planning and social work. At the project’s conclusion, WochenKlausur presented the town council with a catalog of development measures intended to serve as a basis for discussion regarding the community’s future. The interest groups continue to meet, discussing and realizing their wishes for their community. And the new political party Pro-Ottensheim, which established itself during the project, has in the meantime even put a mayor in office.
Pascale Jeannée, Andreas Leikauf, Katharina Lenz, Susanna Niedermayr, Carola Stabauer, Erich Steurer, Andreas Zinggl