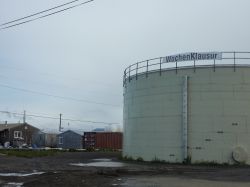 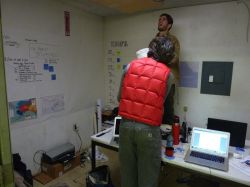 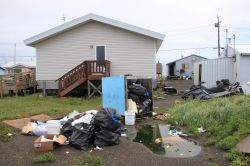 The inhabitants of Kivalina, a small island situated in the arctic circle in northwestern Alaska, live endangered by erosion caused by climate change, without running water or waste disposal. To address these issues WochenKlausur teamed up residents with experts from all over the world. Together they now work on implementing solutions for specific problems i.e.: developing an alternative water infrastructure.


While an intense on-site research with talks to residents as well as with city and tribal officials WochenKlausur identified several urgent problems, the approximately 400 residents have to worry about:
* Their living space, surrounded by water, is limited and narrow: On an average its about 15 people living in extended-family households that are not bigger than 70 m².
* Toilets are not available. Used are so-called honeybuckets: plastic buckets with a toilet seat.  There is no running water.  Water is drawn off from the central water tank (five gallons are 25 ct). The reservoir is refilled once per year in the ice-free months, when the community has the needed money available for it and the Wulik river from where the water is being collected is free of turbidity which happens to be increasingly rare. In addition the world-largest zink mine discharges into the water shed of the Wulik river. In summer 2012 a big storm ruined the existing pipe-system and flooded the local landfill.
* Disposal of all waste is up to the residents as well. Situated in the north of the village there is a growing non-managed landfill. Even though people´s endeavours are great a lot simply remains in town, even leaking bags with human waste.
* People still do traditional hunting and fishing, a local store provides canned and frozen food. Access to green vegetable is limited and expensive.
* Endangered by global climate change causing their land to be washed away the residents of Kivalina are in need of relocation. However this seems quite unlikely in the moment as the legal situation is complex and unclear.

In response to these and to the several construction deficiencies on private and public buildings on-site, WochenKlausur found so called “Agents of Change”, experts who are now sharing their knowledge and resources with the little arctic town of Kivalina. Together with the village they are developing alternatives and implement them on-site. To assist communication the online platform relocate-ak.org was created. A curatorial team coordinate the work of all Agents of Change and address more when needed.
The Agents of Change are among others:
The [applied] Foreign Affairs Lab who is working on water supply, distribution and consumption systems in the village to identify problems and find alternatives for the existing and future village locations.
Katherine Ball, a US-based artist who engages with the youth in Kivalina to open and run a community garden.
Students from the Centre for Research Architecture, Goldsmith University, aim to create a physical model of the village in order to illustrate the complex legal and political relationships in play to make them understandable and questionable.
Architecture Without Borders Austria is designing a new re-location centre in Kivalina where re-location will be planned by the village and its collaborators. The design process itself will create an opportunity for the village and related agencies to see how buildings in Kivalina can be designed more specificely to reflect climate, site, and social life in the village.