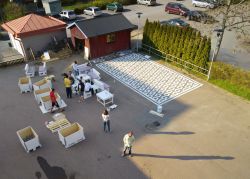 WochenKlausur refurbished a hostel for refugees in Smålandsstenar with the help of its inhabitants and the neighboring community. Together they created a new home out of an old and abandoned hotel.


In autumn 2015 Sweden was one of the main destination countries for refugees coming to the European Union. Even though the Swedish state offers a well developed intake system the urgency of the situation resulted into a shortage of accommodation facilities. Many new housing opportunities had to be found and renovated in accordance to the requirements within a few weeks only.

Also the disused Hotel Smålandsstenar became a hostel for refugees but the engaged stuff had no time and resources to adequately redesign the interior. Especially the run-down, dark and depressing common rooms offered little to their traumatized users. WochenKlausur decided to renew this hostel.

In a first step the necessary adaptations were listed and together with further suggestions for improvement discussed with with the residents and the management team. In a second step all walls were painted white. That alone was an apparent upgrade and motivation for the refugees to take part. Teams formed for all pending tasks: sanding, polishing and finishing of doors and cupboards; seat upholstery, remove inappropriate partitions, renewal of crumbling floor covering and wall design with maps and portraits of the residents.

With the support of Kunsthalle Gislaved WochenKlausur organized all necessary tools and material from local institutions and companies. Every support can be received as a conscious contribution for accepting the refugee hostel and as appreciation of all “new Swedes” as a chance for the regions shrinking population density.

The former parking space of the hotel - not in use anymore - was turned into a new raised-bed garden and equipped with self-made outdoor furniture in order to allow an exchange and integration with visitors and neighbors. A group of local volunteers and refugees agreed to maintain the ground and its facilities. And last but not least WochenKlausur started a longterm cooperation with Smålandsstenar secondary school.

The management and the owner of the refugee hostel agreed to further support all engagements. The established network and a database was handed over to guarantee further improvements and to keep everything in good continuation and repair.

The project should work as best-practice model and constructive contribution to the ongoing debate about refugee matters. The new look of the old hotel should provide a feeling of home and inclusivity.

At the end of the WochenKlausur residency two banners were raised in front of Smålandsstenar home for refugees, stitched by the residents themselves. One shows the peace dove and the other one an elch.