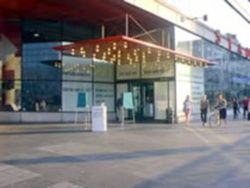 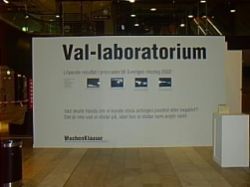 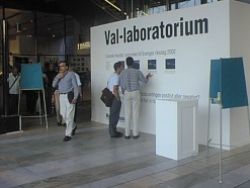 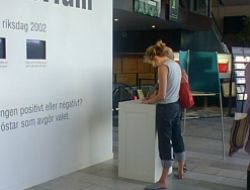 Two weeks before an actual parliamentary election, a fictive election was conducted in the center of Stockholm. In this experiment it was possible to vote not only for a party, but also against one.
During preparations for the project in Stockholm, Pascale Jeannée died fully unexpectedly of a heart muscle inflammation. She was the group’s center and had worked on all of the projects since 1995.


Without doubt, simply voting “for” a party, as is customary throughout the world, is a very crude procedure for ascertaining the intentions of a population. Differentiated opinions, such as “I would be for a party if...” or “I don’t know which party I am for, but I certainly know which one I am against...” have no place in the usual voting systems.

In the weeks preceding the Swedish parliamentary elections in 2002, eligible Swedish voters were asked to come to a voting laboratory that the group had set up in central Stockholm. They were to participate in an “experimental election”, thus demonstrating how a different voting system would produce different results.

In this experiment it was possible to vote in the usual manner for the desired
party, but voters could also vote a second time against a party. Finally, participants were able to specify on their ballots if they would rather vote positively or negatively.

These three decisions allowed four outcomes to be analyzed:

After only a few days, more than 1,000 eligible voters had participated in the experiment. By this time, the party chiefs of both the Christian Democrats, Alf Svensson, and the left-wing Vänster Party, Gudrun Schymen – as well as Culture Minister Maritta Ulvskog – had visited the voting laboratory and cast their ballots. In talks with the press these politicians also voiced criticism of the existing voting system.

The results demonstrated the expected differences. Under the traditional voting system the Social Democrats would have won. If parties had been voted out, the center party would have emerged as the victor, because it received the fewest negative votes. If the voters had been able to cast two votes, one negative and one positive, the first 1,000 ballots would have yielded a victory for the Greens. Finally, if the Swedes had been able to decide if they would rather vote positively or negatively, the Vänster Party would have been the winner. Additionally, the voting laboratory showed that a third of Swedish voters would rather vote out than vote in.