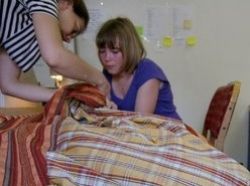 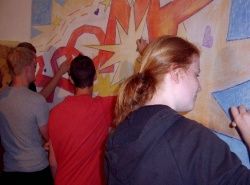 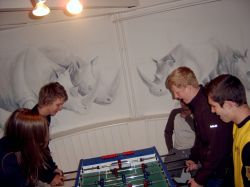 In the context of the so-called 28th Goldegger Dialoge WochenKlausur was invited for a period of 4 weeks to Goldegg, a small town situated in the Austrian countryside, to develop a project together with the teenagers living there. As a result an autonomous youth centre was established in the old round tower of the Goldegg Castle. This meeting spot for the young ones is a place for exchange and shared activities.


Although there is a wide-ranged cultural program offered in the town of Goldegg, almost all proposals are geared to grown-ups. For teenagers the possibilities are much more limited. Therefore WochenKlausur decided to get in contact with all the young Goldeggers´ between 13 and 16 years and write them a letter to ask what their interests are and what they miss in their town.

Next step was to invite all respondents to meet up with WochenKlausur to learn more about their ideas for Goldegg and to find consencus. Within a relatively short time it was very clear what was the main point for all and what they missed the most: a place for the use of the teenagers only. A room where they can play cards, dart or table soccer. Where movies can be watched and where they can listen to music or just be undisturbed. Until then they only had a wooden bus shelter to meet and sit together. According to the teenagers their most favorite choice for such a meeting place had since long been the old round tower which belongs to the Castle of Goldegg and is situated right in front of its entrance. Several meetings between WochenKlausur, the mayor and the municipal council finally brought the desired acceptance that gave the teenagers the chance to use the tower.

And over the entire months of May the round tower of Goldegg Castle was redecorated into a youth centre in cooperation with the young ones, the assistance of the parents and with the help of many more in town. The adaption of the tower was carried out in close liaison with the committed teenagers: in workshops organized and held by WochenKlausur they learned how to write sponsoring letters and in the end they were able to organize a DVD-Player, a projector, a laptop, a table-soccer and a HiFi-system. In addition to the organization of the technical equipment the tower – formerly used as a lumber-room – was cleared up and all three levels were renovated subject to the restrictions of the historic monument conservation board. This renovation process was not always easy, e. g. the ground plan of the tower was a round one which is a demanding starting point especially regarding furnishings. To be able to use the relatively small space as efficient as possible the teenagers build a model on a scale of 1:20 under the guidence of the WochenKlausur team. This model made it much easier to decide how the interior should look like in the end and which floor should be used for what purpose. And as the teenagers wanted to have some comfortable seating accomodation for the upper level, the model showed clearly that a couch or a sofa would have needed much to much space. Together with WochenKlausur they finally developed the idea to equip this room with beanbags. Out of sponsored fabric remnants the youngsters sewed the colorful beanbags by themselves and filled them with foamed polystrene. In addition to that the tower got a new floor, the walls and ceilings were newly painted, a bar was build out of the leftover of an old bench, an old curtain rod became a new stair-rail and in the basement the table socker found its final position on a green synthetic turf.

Next to the spacial adjustment the aim of WochenKlausur was to help the teenagers to establish a workable structure, to set up house roules and to compile a program for the first weeks. For one of the evenings the teenies organized a table-soccer tournament and invited the national association of table soccer to supervise the game, another night was reserved for a birthday party and so on. A youth commisssion with representives of the young girls and boys was voted and an adult board was appointed by WochenKlausur which agreed to assist the teenagers whenever they call for help.

With the project it was possible to give the young Goldeggers an understanding of basic democratic principles and to show what that a situation can be changed with engagement and by being proactive.